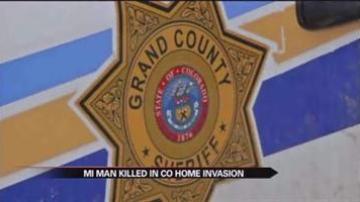 HOT SULPHUR SPRINGS, Colo. — A Michigan man was killed after he allegedly broke into the home of a sheriff's deputy and deputy district attorney in Colorado.

Police say Joshua Stevens, 31, of Coral, Michigan pushed his way into a home in Hot Sulphur Springs, about two hours northwest of Denver.

The homeowners were both armed and home at the time.

One of the victim's was a deputy district attorney. And her husband was a sheriff's deputy. They shot and killed Stevens.

Investigators say this is not related to the other shootings involving public officials.