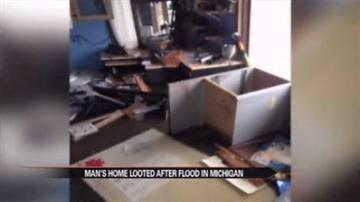 COMSTOCK PARK, Mich. — Flood waters are slowly receding along the Grand River in Michigan but it is not the only thing causing damage for some.

A man says because he was forced to evacuate, it gave his neighbor the opportunity to ransack his home.

He says he came home to an upsetting scene.

"Everything in this house is destroyed. This fellow took everything out," said Bruce Ling. "Children's drawings from K-college, great-grandparents heirlooms, paperwork."

Ling was evacuated on last Thursday.

The man says this is not the first time the neighbor has caused trouble.

Apparently he also cut himself inside the home and that blood sample led to his arrest.

He is currently in the local jail.