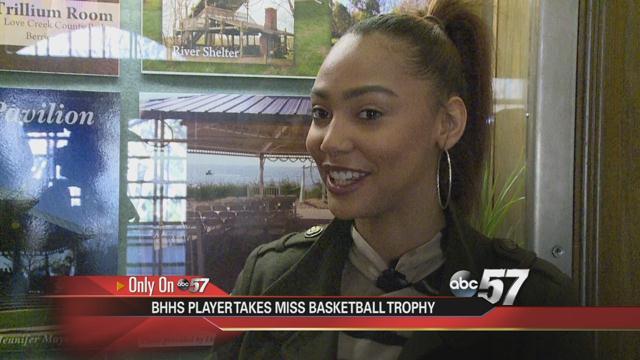 State and county lawmakers have recognized a rising sports star in Benton Harbor. Kysre Gondrezick is the high school's first ever Miss Basketball, awarded to the best player in the state.

We all know how the football team 'restored the roar.' Now Kysre Gondrezick is bringing that to the hardwood.

She's Benton Harbor's seventh Miss Basketball finalist, but the first to ever hoist the trophy. And she blew the competition out of the water. She's in the state record books now with the second most points in a season. She averaged more than 40 points a game. And made national headlines after scoring a mind blowing 72 in a game. But she remains humble through it all.

"It showed the legacy I wanted to leave behind with my senior year," Kysre Gondrezick. "But ultimately I'm just glad we won. I don't think it would look good on my behalf if I scored 72 and we lost. But the fact that I was allowed and able to give the other girls and opportunity to continue to play an add on to their legacy at Benton harbor as a lady tiger is what was most humbling for me."

Gondrezick says she will be playing the University Of Michigan. Her sister plays for Michigan State.