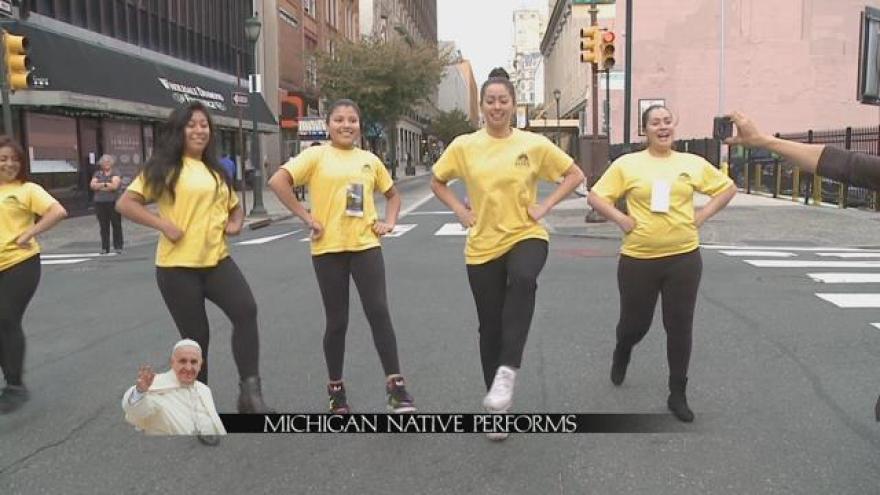 Immigrant heritage and cultural diversity was the message during Pope Francis' address at Independence Mall and there was a Michigan native who got to play a role in the festivities.

Only about 10 groups were selected to perform of all those who applied throughout Philadelphia.

A woman from Battle Creek, Michigan who now lives in Philly and is a part of a Mexican folkloric dance group says this was such a high profile opportunity that she’s wasn’t even allowed to tell her family back in Michigan until a few days ago.

The group's Saturday morning started by filling the streets of Philly with the sounds of stomps.

But for Amalia Miralrio, this journey started back at home hundreds of miles away when she heard the music and aspired to dance to it one day.

After moving to Philadelphia, Miralrio found a group that performs a variety of traditional Mexican dances called Folklorico Yaretzi which means someone who is loved.

Miralrio says dancing to this music brings on emotions that can only be shown through action.

“Spirituality is about the things there aren’t words for – just like dance – so I think it’s a really good fit,” said Miralrio.

Folklorico Yaretzi dancing for the papal visit is the connection Miralrio is talking about. Miralrio and about 15 others have been practicing for days to perfect their 10 minutes in front of the pope.

“I think most of us have not gone a day without dance in weeks,” she said.

And the practice paid off as Miralrio ended the day dressed in a white traditional Vera Cruz style dress crowned with red roses and a smile on her face.

Security was so high at the event that they weren’t able to take video of their performance but it’s something they will never forget.