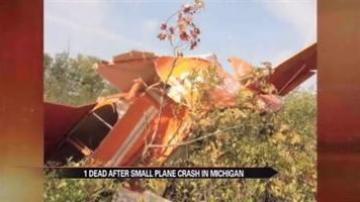 BRIGHTON, Mich. -- One person was killed after a small plane crash in Brighton, Michigan.

The 56-year-old Costa Rica woman was visiting the area. A 79-year-old man is in serious condition.

The man was taken to an Ann Arbor hospital by helicopter.

Witnesses say the plane appeared to have engine trouble.

They say it barely climbed over the tree line when it crashed into a swampy area.

"I noticed he got above the trees and he wasn't climbing any higher and he tried to turn, and then it just diminished right into the woods and I heard a thud and the plane just nosedived into the swamp," Russ Yopek said.