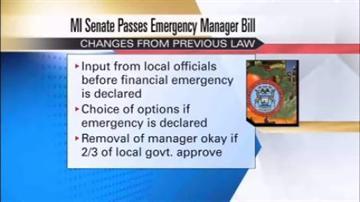 LANSING, Mich. -- The Michigan Senate passed a replacement for the emergency manager law.

The new proposal would replace the one repealed by voters last month.

Some of the provisions in the bill include allowing for more input from local officials before a financial emergency declared.

The proposal would also give officials a choice among several options. Two of those options include bankruptcy or an emergency manager.

Communities will also have the option of removing an emergency manager if two-thirds of the local unit of the government votes in favor of removal.

Governor Rick Snyder has already endorsed it. But there is no word on when he will sign it.