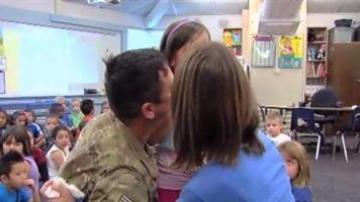 WARREN, Mich. --  Riley Harris, a six-year-old at Warren Michigan Elementary School, went to get her school journal but when she turned around someone one special was waiting for her.

It was her dad, Corporal Jeff Harris.

Still in his fatigues, he had his arms wide open for his daughter.

Harris waited one more night way from his family so that he could give his daughter this special surprise.

He returned Sunday night after a year long deployment. This was his first tour of duty in Afghanistan with the National Guard's 125th Battalion. Harris hugged and kissed his wife, Teresa. He then spent the night on a friend's couch so he could surprise his daughter.

"Everything you do, you just think about getting home," Harris said.

The family plans to spend some time getting re-acquainted before Harris heads back to work next month.