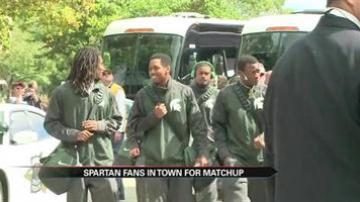 SOUTH BEND --- We ran into some Michigan State fans on campus Saturday. They made trips from as far away as New Jersey just to see the game.

Those fans say they were welcomed with open arms by Irish fans.

Although they are enjoying the gameday, they hoped the Spartans would win.