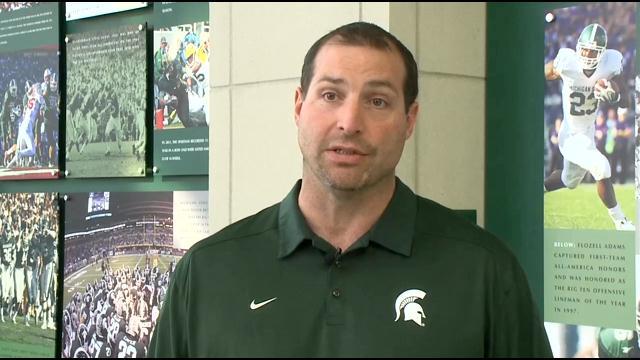 A member of the Michigan State Spartan's leadership team has ties to Michiana. Mark Staten grew up in Dowagiac and now he's the big man on the sidelines giving orders to Michigan State's offensive line.

He says Southwest Michigan made him into the man he is today.

He is still close with his high school football team. He said this summer they threw a party for their former high school coach.

“I got to go back to his retirement party and my father coached for him as well. So not only did I play for him but he changed me in a lot of ways because you're a boy and then you become a man. And football helped develop me. And so did Coach Dock," said Staten.

After high school Staten went on to play at Miami of Ohio, spent two seasons in the national football league, and then found his way back to Michigan State as an offensive line coach.

“To be back at one of the premiere institutions not only in Michigan but in the nation, it's just been a thrill," said Staten.

He says his friends from Dowagiac football still text him tips after Big Ten games.

“I'll get my phone out afterward and there's 40-plus texts and a lot of times half of them are from the people in Dowagiac," said Staten.

Staten's former high school coach is elated about Staten's success at Michigan State and says he hopes they beat the Buckeyes.