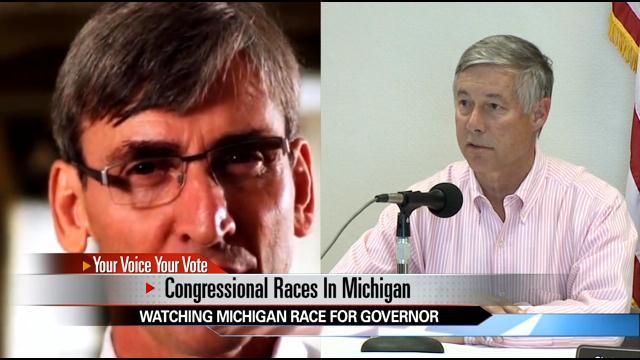 The race for Governor of Michigan could all come down to who shows up at the polls. But the race bears so much weight for both parties that major players from on both sides are showing their support for party candidates.

Most polls give the incumbent Republican Rick Snyder a slight edge over his democratic challenger Mark Shauer.

Both candidates spent their Sundays around the state in a final last minute push to get votes.

Both Snyder and Schauer are bringing out all their friends. President Barack Obama and former president Bill Clinton have recently backed Schauer.

New Jersey governor Chris Christie is scheduled to be in Michigan Monday to campaign with Snyder.

The race for Michigan's 6th district has energy advocates across the country talking.

Incumbent Fred Upton has been the Chairman of the House Energy and Commerce committee on Capitol Hill since 2011.

If he loses to Democratic challenger Paul Clements, the committee will be looking for new direction.

Upton has been serving for more than 20 years. Clements, the Western Michigan University professor, hopes to end that.

In order to vote in Michigan you need to bring a valid photo I-D. To find your polling location head over to vote.michigan.gov.
Share this article: