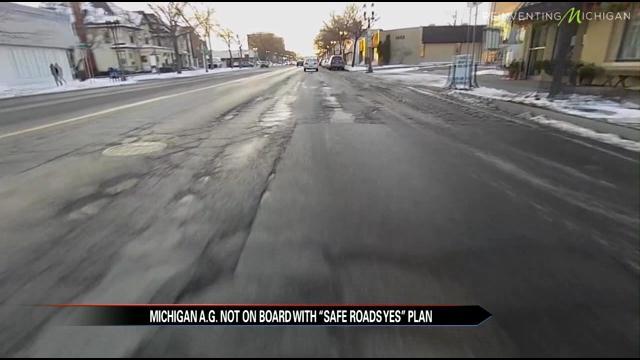 Michigan Governor Rick Snyder wants residents to vote ‘yes' in May to raise the state's sales tax to fix roads, but Attorney General Bill Schuette is saying ‘no.'

When voters mark their ballots on May 5th they'll not just be voting on more money for roads, but also for schools, mass transit, and Michigan's general fund.

Governor Snyder's proposal calls for an increase in state sales tax by one percent.

It would also spark a separate, and higher, fuel tax.

Proceeds from that would go directly to roads and mass transit.

Snyder's “Safe Roads Yes” campaign projects the proposal would generate more than a billion dollars for that.

But millions would also be raised for schools, cities, and the state's general fund.

Schuette told M-Live that's “just too much under the tree.”

He wants to see a different proposal that would that would strictly cover road funding.

Schuette's disagreement raises eyebrows. He usually agrees with Governor Snyder, but Schuette is a potential 2018 challenger for the Governor's seat.

Michigan residents will vote for Proposal 1 on May 5th