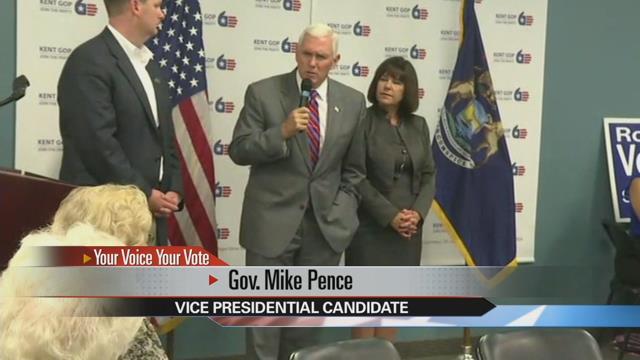 Indiana Governor Mike Pence made a trek across state lines Thursday to talk to republicans in Michigan as the Vice Presidential Candidate.

The governor swung by the Kent County G.O.P. headquarters in Grand Rapids and he was talking up his running mate Donald Trump.

"I'm here to tell you, he's a good man and Donald Trump is going to be a great president of the United States of America. He's a patriot, he's a patriot, he's a fighter, he's a builder. He's a very candid man. He speaks his mind to the American people, and he has a vision to make America great again. He truly does,” said Governor Mike Pence.

He went on to talk about the moments right after trump extended the VP offer to him.

He said that after he got the call, he prayed with his family about it and then told Trump yes because he thinks America needs him.