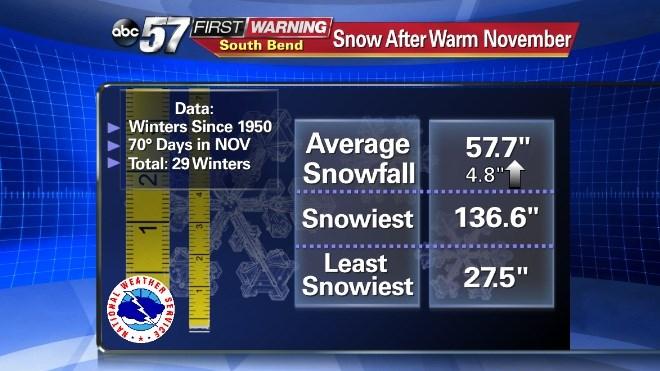 Typically, a normal high of at least 70° ends in late September in Michiana.  However, this fall still wants to hold onto those late summer temperatures just a little longer.  With 4 out of the first 5 days of November reaching into the 70s, many are not complaining about the unseasonably warm, sunny days to start off the last month of meteorological fall, but does 70 degree weather in November signal what the winter months will bring to Michiana?

According to the National Weather Service of Northern Indiana, data collected since 1950 shows a relationship between the amount of snowfall in the winter following a warm November and in a strong El Nino.  Since 1950, only 29 winters have been preceded by a November that saw at least one or more days with a high temperature of 70° or greater.  Within those 29 winters, the average snowfall was 57.7”, just 4.8” above the normal snowfall we typically see.  The snowiest winter of those 29 dumped a remarkable 136.6”, a difference of nearly 110” between the snowiest and least snowy winter.

As for a winter following a near record warm November paired with a strong El Nino (we've explained what and how El Nino works here), the data collected since 1950 can only be pulled from three separate winters.  Within those three winters, the average snowfall from December through February was 50.3”, just 2.6” below normal compared to all winters.  The difference between the snowiest and the lowest snowfall total was just 11.1”, a much closer spread than a winter following a warm November absent of a strong El Nino.

So, what can we expect for Winter 2015-2016?  With an El Nino in place, it’s likely we’ll see less snow than the previous two.  Chief Meteorologist Tom Coomes breaks down his Winter Outlook here.