Million dollar question: Who will be QB at Notre Dame? 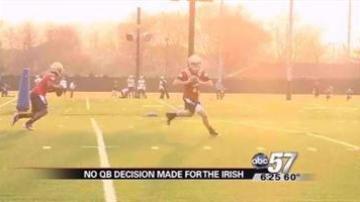 SOUTH BEND, Ind.-- It is the million dollar question, who will be the starting quarterback for The Irish this fall?

The entire Notre Dame Football team has been hard at work during spring practice.

Coach Kelly said that the hasn't made his big decision just yet, and the quarterback hopefuls will have to wait a little longer for the announcement.

Kelly said, "We've got a lot of evaluating to do about the quarterback position. Because you know, each one of them is individually distinct from the other. They each have their own strengths and weaknesses that we're working on."

Earlier on Wednesday, there were rumors that defensive end Aaron Lynch had quit the team, but Coach Kelly told ABC 57 News that was not true; Lynch was simply excused from practice for personal reasons.