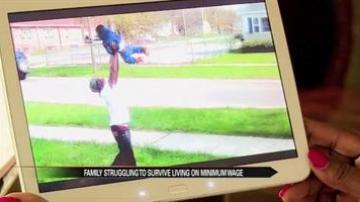 BERRIEN COUNTY, Mich. -- Michigan Governor Rick Snyder signed a bill into law that will increase the minimum wage in Michigan to $9.25 by 2018. For families who live paycheck to paycheck, every hour of work and every cent matters.

"He has a son that he loves very dearly and it makes him depressed sometimes when he cannot provide for him like he wants to," said Rosette.

Governor Snyder signed the increase into law late Tuesday night and it will slowly go into effect through 2018.

Until then, Rosette’s son is actively looking for a second job because, for him the current minimum wage rate is not cutting it.

Rosette says it is hard to watch him struggle because her son is a good kid.

"He’s a graduate, he has a diploma. All he wants to do is go to work and be a good father for his child and to provide for his kid," said Rosette.

Rosette says for her family, and her community, this raise is a blessing.