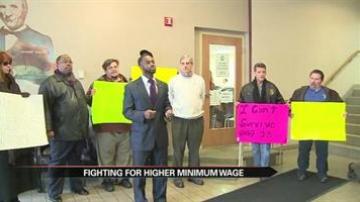 SOUTH BEND, Ind. -- Fast food workers and civil rights groups all over the nation took part in protests and rallies to raise minimum wage. In the state of Indiana, minimum wage is $7.25 an hour, which means many families live below the poverty line.

Two local mothers who make minimum wage say it is impossible for them to take care of their families on such low wages.

"If I made more money, we could actually be able to take care of ourselves instead of the government giving us assistance," said waitress and mother of one, Erica Arceneaux.

"I can't afford everything I need because making $7.25 an hour don't get you nowhere," said Christina Larrison, who has four children.

Larrison says to say she's struggling is an understatement.

Larrision works six days week. But at this rate, in one year, she will have only made $15,000.

For food servers who rely on tips, even though the work is there every day, their income is very inconsistent.

"It is hard making $2.50 an hour. It's a struggle because it's just hit or miss. You do not know what's actually be going to happen that day," said Arceneaux.

The nationwide protests are a way to encourage the US to rethink the idea of a minimum wage and put everyone on a livable wage of at least $15 an hour.

"I think that would ease my mind a lot, I wouldn't go into work wondering if I'm going to be able to pay my electric bill," said Arceneaux.