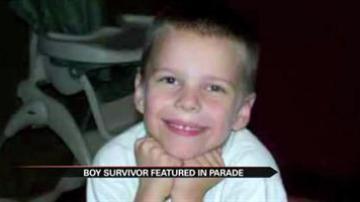 Nathan Woessner and his family were featured as Grand Marshals.  They rode in a special float during the parade.

Woessner was rescued after he was buried under 11 feet of sand for more than three hours last July.

Since he was rescued, the Mount Baldy area has been closed.  Scientists are trying to find out what caused the dune to collapse.