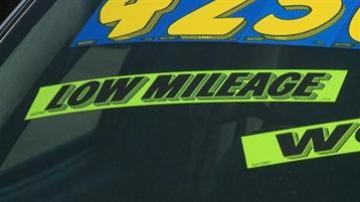 MISHAWAKA, Ind. -- A victim who bought a car with an allegedly rolled back odometer is speaking out.

It was the first car Art Smith bought himself.

Short on cash, he just needed something to get him from one place to another.

"When I went up to the car originally, I was like 'Oh, $3,000 for a decent vehicle that will get me to and from getting my song -- this sounds like a great deal,'" Smith said. "Obviously, that wasn't the case."

Smith had no idea he was one of many getting ripped off.

Last week, cops busted Adam Scott, after they said he rolled back several car odometers in his lot, a Class D Felony per case.

"The problem would be that unscrupulous people are buying cars with 280,000 miles on it, rolling the odometers back to like 40,000 miles and making a ton of money on it," Eric Tamashasky, with the St. Joseph County Police, said. "It's a terrible problem for the consumer."

A problem, that violates consumer's trust and safety expectations.

Smith later found out his car had been totalled before buying it, something that was never mentioned.

"I don't have thousands of dollars to just give away to another dealership," Smith said. "Now, I'm going to have to go and look for another car, because I don't trust what this guy is selling."

We went to Scott's Auto Sales looking for answers, but our calls and knocks didn't get anywhere.