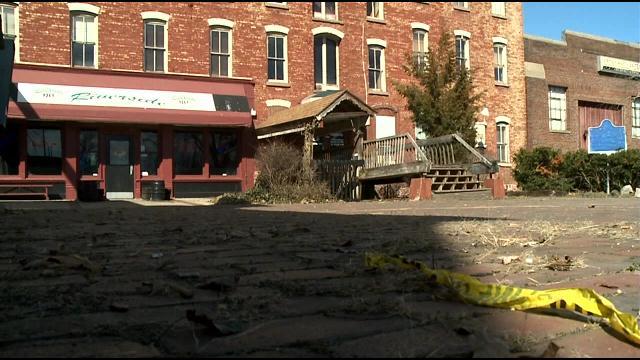 The 100 Center in Mishawaka has historically been a place for entertainment in the Princess City.

Mishawaka Police are still searching for suspects involved in Saturday morning's shooting outside the Riverside Bar.

Amy Gatchell is frustrated that her bar is getting a bad name because she truly feels she has done her best to protect her business and works hard to allow customers to simply have a good time.

Pieces of caution tape linger in front of the bar.

“There's signs posted everywhere that there's no loitering and they don't listen. It's a battle, it's a battle,” said Gatchell.

It is a battle Gatchell feels she did not win on Saturday morning.

“The group that was outside loitering in the lot came from a couple other locations, other bars,” said Gatchell.

Loitering soon turned into gunfire feet away from her business in Mishawaka's 100 Center.

Police say one woman was shot.

Minutes before the shooting, Gatchell says the group responsible tried to come into her bar but they were not allowed in.

“I have zero tolerance for any of this,” said Gatchell.

It starts with her dress code.

Her security officers deny anyone trying to come in with sagging pants, or other suggestive clothing.

“A lot of times if you come to the club and you're dressed in a nice shirt, nice pants, you're less apt to cause trouble,” said Karl Malone, a security guard at Riverside.

Gatchell said her team can only do so much and Saturday morning was out of their control, and now she is turning to police for assistance.

“I just need help with Mishawaka Police Department. I think we need more patrolmen outside patrolling like they used to,” said Gatchell.

She is also adding increased security to her bar by arranging for Mishawaka Police Officers to secure the inside of her bar.

Gatchell says it is starting to get personal.

They are tears she believes she should not have to shed to keep her business alive.

She hopes the violence ends before her business has to.

“It won't last, if the troublemakers continue to come,” said Gatchell.

In addition to the increased police patrol, Gatchell is hoping to get increased lighting in the parking lot as well.
Share this article: