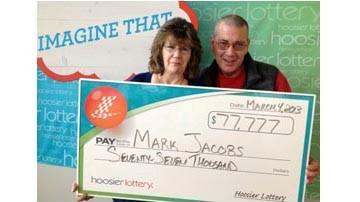 MISHAWAKA, Ind. – A Mishawaka couple has won $77,777 in a Hoosier Lottery game.
Mark and Cheryl Jacobs of Mishawaka won the top prize on a Super 7s scratch off purchased at One Stop on Day Road.

The couple has been married nearly 30 years and plans to use the money to pay bills – and hope to go to Hawaii.

They told lottery officials they planned to go to Hawaii for their 25th wedding anniversary, but they were unable to make the trip.

They both retired from RV factories in the Elkart area, but had to retire when they were severely injured in a car accident.

"We're going to pay bills," said Mark Jacobs. "If we can, we might go to Hawaii."