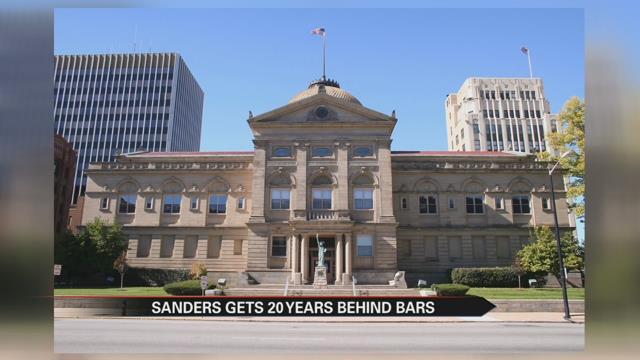 On Monday, a 20-year-old Mishawaka man was sentenced 20 years for a killing a teen at Crawford Park. What was supposed to be a drug deal turned into a robbery.

Mapes was 16-years old at the time and instead of selling Sanders some pills, he robbed him and ran. He was then run over by Sanders and later died at the hospital.

Sanders addressed the court. He said he was sorry for the events that lead to the death of Mapes.

Sanders’s step mother, along with Mapes’s father, mother and oldest sister, all made statements in a St. Joseph County courtroom. All seemed distraught some even cried.

Sander’s attorney, Charles Lahey, says he may be released sooner.

“Indiana law requires to serve 3/4 of that. He’ll have about a 15 year actual time sentence,” said Lahey.

He added Sanders will be eligible for drug and depression therapy while in prison.

Judge Elizabeth Hurley addressed those in the courtroom saying she feels bad for everyone involved, but said Sanders had the final choice, in which he decided to run Mapes over and leave the scene.

Micah Cox, the deputy prosecutor, said the Mapes family has suffered a lot. “They have to live with the consequences of the defendant’s decision and they’re good people and it was a difficult case for them to live through.”

But both lawyers agree that in this case both families will forever be impacted.

“All are punished,” said Lahey.

Mapes’ family say they feel numb because they will never be able to tell their troy how much they love him and Sanders’s step mother agreed the Mapes family is dealing with a greater loss, but said deep down sanders is a good person.

Now, Sanders is planning to appeal his sentence.