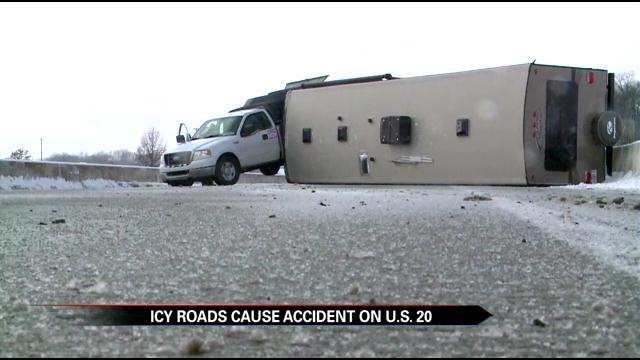 Russell Lavine, of Mishawaka, was driving his pickup Tuesday afternoon, and carrying a 30-foot trailer. The truck started to swerve and the trailer was flipped on its side and the truck was raised nose down off the ground.

“Scary I mean all I knew was that I was nose first,” says Lavine.

Lavine was driving a travel trailer for work from Elkhart to Wisconsin when his delivery took a detour.

“I looked in my rear view mirror and all I seen was the trailer and I mean it was like taking a piece of paper and folding it in half,” explains Lavine.

Lavine vividly describes the accident, and then he says happened in seconds.

“I was driving just fine got up here on the bridge got about 200 hundred feet back that way and next thing I know I just started sliding,” says Lavine.

He was sliding on the Bypass that has been salted but St. Joseph County Corporals on the scene say salt doesn't always work when drivers aren't taking it slowly.

Lavine's truck and trailer blocked both lanes of the west bound Bypass at Elm Road but he managed to not hit a single passing vehicle.
Share this article: