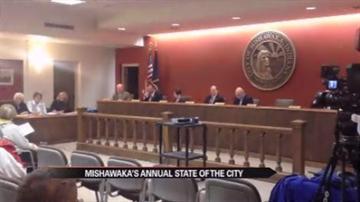 MISHAWAKA, Ind. -- Mishawaka Mayor Dave Wood gave his annual State of the City address Monday night to a packed house. He spoke about the economic direction of the city and two big fires that happened in the last year.

Wood spoke of the economy, jobs, the increase in crime and of the largest fire in Mishawaka’s history.

A fire destroyed the former RMG Foundry plant several days ago. Wood says it is amazing no lives were lost.

He said investigators are still in the beginning stages of a very long process.

“As far as potential development, I don’t know if they are planning to rebuild,” said Wood.

The mayor says he plans to continue investing in improving infrastructure, he believes that is the key to bringing hundreds of jobs to Mishawaka in 2013.

For those who are still being affected by the rolling AM General layoffs, he says that is an issue that is much larger than Mishawaka.

“It’s more reflective of the national debt crisis and military cuts rather than the local economy,” said Wood.

The mayor announced that last year rapes and murders increased in the city, but says every murder suspect was caught.

“We will go to the ends of the earth to make sure that we get justice,” said Wood.

To fight crime, wood says the city will install surveillance cameras and call towers that will be direct lines to the police station along the River Walk and downtown.