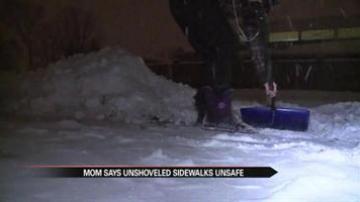 MISHAWAKA, Ind. --With the snow continuing to fall, sidewalks are covered across Michiana making it dangerous for children that have to walk to school. One Mishawaka mother went out and shoveled sidewalks so her kids and their classmates could get to school safely.

Mother of two Tiffany Peppers spent Tuesday night shoveling her neighbors’ sidewalks so she and her kids could walk safely to school Wednesday morning.

“My kids go over to Beiger. I am shoveling the insurance place and the sidewalk down there,” said Peppers. “I can’t keep walking into the street with my daughter and her stroller and my other kids risking getting hit because they do not want to shovel their sidewalk.".

Peppers says she has called the insurance place multiple times asking them to shovel their walkway, but they never did. So she took it up with the city.

“I have called Code Enforcement on them twice today and they still have not shoveled their sidewalk,” said Peppers.

As I followed Peppers around while she shoveled snow from the sidewalks, I noticed an orange ticket on one of the homes, which was a citation from the city for not shoveling.

As a single mother, Peppers says she cannot keep cleaning up after her neighbors.

“They need to enforce shoveling the sidewalks,” said Peppers.

She says the time it would take them to do their part is well worth keeping her kids and other Beiger Elementary students safe while walking to school.

“It took me twenty minutes just to shovel. It does not take long. It is that easy to come out here and shovel it so that people like myself and my kids do not get hit because we have to walk in the street,” said Peppers.

ABC 57 called the insurance company to see what they are doing about shoveling but they have not returned our calls.