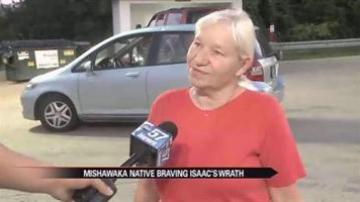 MISHAWAKA, Ind. -- A Mishawaka woman says she is okay but is nervous for son who is waiting out Hurricane Isaac in New Orleans.

"He woke me up at three in the morning, calling and saying 'where's the eye of the storm', is it over him yet," Zeiger said. "He's just looking out the window and telling me things are flying in the air. He was really frightened."

Zeiger said her son has been evacuated twice, including once during Hurricane Katrina.

This is the second hurricane that Kenneth has stayed through.