Mishawaka neighborhood replaces a 'White Christmas' with a bright one 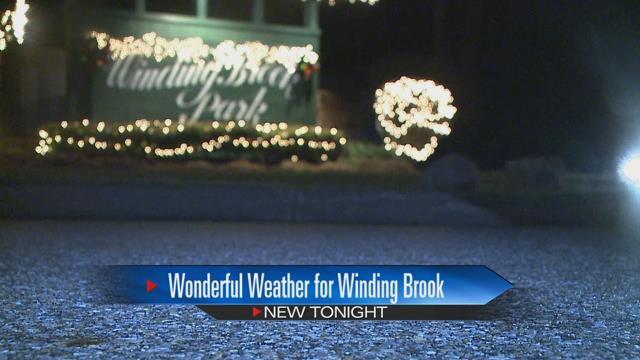 Volunteers are calling this week’s weather the most wonderful time of the year.

There will be no 'White Christmas,' in fact it might be warm enough to bring out those tiki torches, but that doesn’t mean a favorite tradition for many has to end.

The Mishawaka neighborhood Windingbrook has been filled with lights for over 3 decades.

Monday, volunteers were still feeling the holiday spirit despite the unseasonably warm weather.

They can also still feel their toes as they don’t have to worry about standing outside under frigid temperatures.

It’s not the weather they were hoping for but it still looks a lot like Christmas.

“They do a wonderful job at Windingbrook,” said volunteer Peggy Voorhies. “I know that the people that have been coming through have been enjoying the light displays and the different colors and displays that are shown.”

It’s holiday heaven for drivers hitting this Christmas cul-de-sac and for the first time in a long time, they can roll down their windows and look closely at the dozens of brightly lit and warm welcoming homes.

“The beautiful decorations and lights are what drivers come to see.” Said Voorhies.

The keyword is warm and it’s perfect weather for the neighborhood’s helpers.

“It’s not snowing” said Voorhies. “You know what, it’s nice for us who are standing and collecting donation.”

Those are volunteers helped visitors  give back.

“Any donation that they want to give, the money is split among eight different charities,” she said.

The lights shine bright on more than just this neighborhood's festive mood.

It’s a spotlight on their commitment to spreading charity and fellowship, one lit home at a time.

The lights tour has been going on for decades.

Thousands of cars are expected to visit the neighborhood this year.

The neighborhood will open up the tour every day until Christmas from 6 pm until 10 pm.