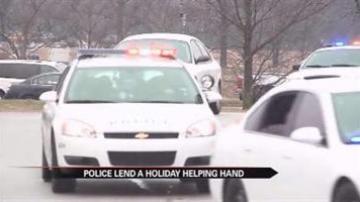 MISHAWAKA, Ind. -- Lights and sirens were seen and heard on full blast as police flocked to the Mishawaka Meijer on Grape Road Sunday. The police weren't responding to a crime or disaster, instead the officers were volunteering their time to help children in need this Christmas season.

Thirty-two kids from the Mishawaka community were paired up with police officers who volunteered their time to take the kids to Meijer to get them plenty of toys that were on their holiday wish list.

For one Michiana Mom and her two boys, it really meant a lot being part of the event because of what they are going through right now.

Jennifer Cole said she was actually pleased and proud to see her kids in the back of a squad car early Sunday afternoon, as she was waiting for the police car they were riding in to pull up in the Meijer parking lot.

She said their day began this morning at the Mishawaka FOP where dozens of police officers shared donuts and juice with children and their parents.

Then parents drove separately to the Meijer store as the kids got a personal escort in what seemed like a mile long procession of squad cars to the Grape Road location.

"Tommy D is 6 years old and he goes to La Salle Elementary School and Brandon is 12 and goes to John Young Middle," said Cole.

Her boys were two of the lucky children in need that got paired up with a police officer and escorted to Meijer to do a little shopping with the Mishawaka Police Department. Before Tommy and Brandon even got in the store they both were impressed by the ride over.

Cpt. Pasquale Rulli Jr. the Mishawaka Police FOP President said, "We had 25 officers that volunteered this morning and we had 32 kids."

One of those officers, Sgt. Paul Robinson was paired up with Tommy and Brandon.

Cole said. "Just recently we lost Tommy D's step-father to liver disease, so this Christmas is going to be a very hard one for us."

Sgt. Robinson said, "It's sad, you feel bad for them, to lose someone around the holidays or really any time when they are that little. That just rips something out of you, I know how that feels, that doesn't go away over night- that takes a long time for that healing. My Mom, 12 years ago she died and I wasn't expecting her to die and it felt like somebody reached in and tore something out."

Which is just one of the many examples of what ultimately led officers to team up with youngsters.

Cole said as she was holding back tears, "Just to see Tommy pick up that first toy, the first toy that Mommy hasn't been able to afford to get him was worth it all."

"Each child got to spend around $130.00," said Cpt. Rulli. "Meijer donated half of it and the FOP matched the half that Meijer donated."

Sgt. Robinson said, It's nice to see the kids being able to get some toys that they probably wouldn't be able to get for Christmas.

Which Cole said is exactly the case this year as she is financially strained while they continue to grieve the September loss of their loved one.

"Anyone who knew him would say Tom put everyone's needs above his own and he loved his family and we would think today was very awesome."

This is the third time Mishawaka Police partnered with a retail establishment to offer children the opportunity. Cpt. Rulli said they plan to do it again next year and make it an annual thing.

Christina Fecher, a Meijer community relations specialist said in a written statement, "Meijer is pleased to partner with the Mishawaka Police Department to ensure area children have a happy holiday. Events like this truly capture the spirit of the season and Meijer is so proud to be able to share in the joy. "