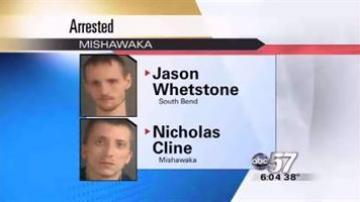 The two men were parked near Twin Branch in a Dodge Durango. Police said they found evidence inside the Durango linking the suspects to other burglaries in the area.

Detectives from Mishawaka, South Bend, and the St. Joseph County Police Departments have been working together to solve several of the burglaries reported in October and November.  Police said that teamwork paid off on Wednesday.

Cline and Whetstone were both arrested on charges of burglary and are being held in the St. Joseph County Jail.