Mishawaka police car gets away, ends up on riverwalk 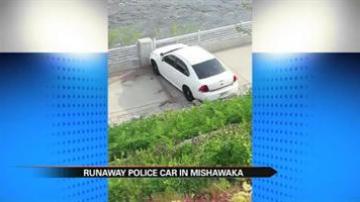 A Mishawaka Police car ended up in a very unusual place Wednesday-smashed into the rail of the Riverwalk.

It wasn’t a typical day at the 7-Eleven on Mishawaka and Main street.

Cashier CJ Freshour said he was on his lunch break when he thought he heard a car engine revving.

“Two police officers that was in the building getting coffee stormed out of the building,” he said.

He said in the minute it took police to pour a cup of coffee someone tried to take the Mishawaka Police cruiser.

“I look over and I see the police officers running towards the bridge,” Freshour explained.

That is the spot where the car landed, across the street, down an embankment, and onto the Mishawaka Riverwalk.

In a statement to ABC57, Assistant Police Chief Dan Gebo said, “We are investigating why the car slipped out of gear and are grateful no one was injured."