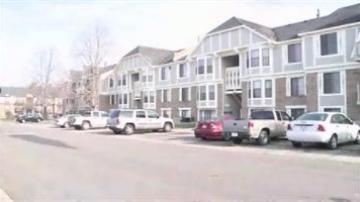 MISHAWAKA, Ind. -- The Mishawaka Police Department is searching for the man who they say committed two armed robberies, one Friday afternoon and one Saturday evening, at Hickory Village Apartments.

The suspect is described as a black male, 5'5" to 5'7" tall, between 120 and 135 pounds, in his early to mid 20s. He was wearing a gray coat and gray hat Friday and camouflage pants, a black hoodie and dust mask Saturday. Both times he was armed with a revolver, police said.

Doug and Shanna Neal are pastors at the Christian Life Center, which sits right across the street from Hickory Village Apartments.

They've heard stories of crime at the apartments but didn't take any extra safety measures until three months ago.

"We just recently got an alarm system installed, a security system put in," said Doug Neal.

"Along with additional lighting to keep it lit," said Shanna Neal. "Lighting is really helpful I think it's a good deterrent."

With two armed robberies in less than 48 hours, they say they're glad they put in more security.

"It makes us feel good though that we did take some precautions ahead of time," said Shanna.

"We really believe that at this time of year, we have a season of hope going on right now. We have opportunities for people to give, for people to share, people don't have to steal," said Shanna.

Police Lieutenant Tim Williams says this suspect could have become desperate for a number of reasons.

Whatever the reason, police want him off the streets.

"We don't want this person in our community, so one, that we could keep it from happening to any other persons and that we can keep people safe," said Williams.

If you have any information about these robberies you're asked to call Crime Stoppers or Lieutenant Kevin Will at 574-258-1684.