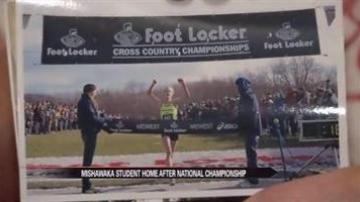 MISHAWAKA, Ind. --  That moment when you cross the finish line with your hands in the air as a national champion, it doesn’t happen for everyone, but it did for Mishawaka High School sophomore Anna Rohrer.

“It was really exciting and I was like, 'Wow I cannot believe this just happened,'” said  Rohrer.

Rohrer said she could barely catch her breath when she crossed the finish line and won the 2012 National Footlocker Cross Country Championship.

She finished the 5K in 17 minutes and 25 seconds, but it was not easy, especially when she took a spill during the race.

She did get back up and as Rohrer’s dad showed the Sports Illustrated his daughter was featured in, he said he could not be more proud.

“This has just shown the phenomenal young woman she has become.  This season has caused so much personal growth for her, that I am just realizing how truly blessed I am as a father to have such a wonderful daughter,” said Rohrer.

Mishawaka High School is hosting a pep rally for Rohrer. It's set for 2:30 p.m. Monday at the high school.