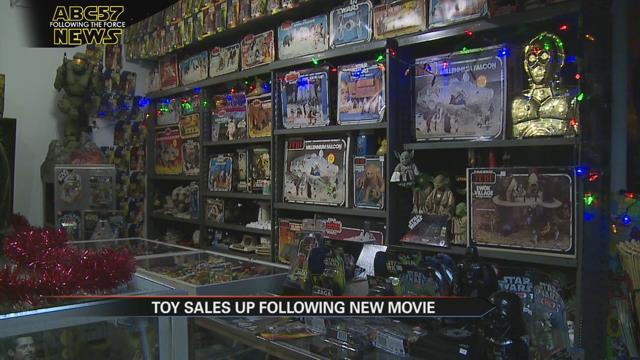 Star Wars toys are dominating the shelves of local stores, including Tom's Vintage Toys in Mishawaka.

"I've loved Star Wars forever. I was 12 years old in 1977 when the movie came out so I was the perfect age to really love it. It's just an exciting story and there's so much people can relate to. It's an epic adventure."

"I've collected comic books and action figures, and when I got older I got rid of them and moved on but I felt nostalgic. I really wanted my childhood back and so I started collecting again and it led to this."

"I've wanted a toy store for decades and a couple of years ago I was thinking about it and I thought, ya know, if I -- even if it's a spectacular failure, I'll regret it if I don't try. And I'm so glad I tried."

"There's no place in the area that you'll find this much vintage Star Wars, that you could walk home with."

"There's the X-wing fighter, the tie fighters. You know they made so many play sets and what was great about it was you'd see the movie and then you could get the toys and re-enact the scenes and bring in all the different characters and then create your own adventures."

"What I see is generational. I see a lot of dads come in and they want their children to play with the same toys they had, so they're buying the same vintage action figures that they had when they were children. It's really fun to see them interact on that level."

"It's one of the fun things about having this store, is every day I think 'I wonder what'll walk in the door today', and often it's something amazing so that's real fun."