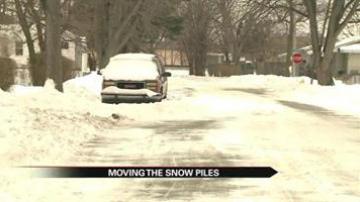 MISHAWAKA, Ind. -- Mishawaka snow plow drivers have been working nonstop since the big snowstorm. All the plowing has left mounds of snow that need to be removed. The city takes the snow to local parks where it won't cause problems.

"It's keeping us busy. There has been a lot of snow, too much snow," said Alan Tudor of the Mishawaka Streets Department.

Tudor hasn't had to consistently transfer snow off the roads as often as this season.

Where does it go? To empty parks.

But all this snow can't get moved off of the streets to the parks until the snow plow drivers are done clearing the roads.

It's a never ending battle.

"We just don't have the manpower or the time, we are more worried about the streets for the public's safety," said Tudor.

With so many cars left on the side of the road, the streets department is consistently having to plow around them, eventually making them just look like piles of snow.

"This is a nuisance right now. One of us on nightside might accidentally might try to push it back and realize it was a car too late," said Tudor.

Cars will be ticketed if they are parked in the same spot for too long because they can become damaged by the snow plow drivers.