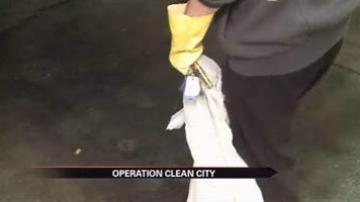 MISHAWAKA, Ind. — While driving or walking around, it does not take long to find some litter on the streets. But one Mishawaka woman hits the streets nightly on a mission to tidy-up her city.

She says some people call her crazy.

"I get a little exercise," said Sharon Ross.

She is from Mishawaka and hates all the trash she sees thrown on the ground.

"There's too much because people are too lazy," she said. "You know where to get that drink, get that candy bar. But you don't know what to do with the paper."

She walks around her community before the sun comes out. Many times as early as three or four in the morning. She says the job can be tough. But it is one that makes her feel good inside.

Bag in hand, she picks up trash, and even a few nickles and dimes on the way. And sometimes, she hits a jackpot.

"The biggest thing I found was an NFL jersey, size 52," said Ross.

And her biggest fans are children from a nearby daycare center.

"You see all these little kids waving and they're pretty much asking they're teacher," said Ross. "What's that crazy lady doing? Teachers tell them, 'She's picking up after y'all.'"

Ross says she hits the streets early in the day because her husband is terminally ill. It gives her something to do, makes her feel good too.

"I don't have money. I can't sing and dance, so this is my little contribution," said Ross.

Ross says you can help out too just by throwing out your trash, or picking up some trash you see on the ground and throwing it away in a trash can.