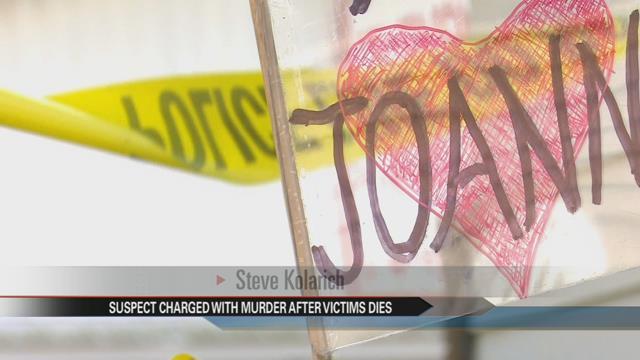 A woman died several days after being beaten in her home. Her neighbor is charged with murder.

One man who says he witnessed the suspect dumping a bloody coffee table in the dumpster spoke out publicly for the first time.

“I was sitting at my wife’s work, and I witnessed a gentleman carrying a table out and throwing it in the dumpster, and running around like he was disoriented, didn’t know what to do next,” said Jeremy Spencer.

Saturday morning he was charged with murder and serious violent felon in possession.

“She got along with everybody here. She even got along with the guy that supposedly is the suspect,” said Newgent’s next-door neighbor Steve Kolarich.

Police say the beating happened after Newgent asked Wilson to turn his music down Thursday night.

“From what I’m finding out, she called one of our other neighbors over here, Clark, and told him I just went over to such and such house and told him to turn his music down. He cussed me out and slammed the door in my face. Well a few minutes later, she called Clark back, and the words she got out on the phone were ‘Oh my god’,” said Kolarich.

Wilson allegedly hit her with part of a coffee table, according to the St. Joseph County prosecutor.

“I seen three table legs in the dumpster, and outside the dumpster was the table, which had a red substance on it, which I guess was blood,” said Spencer.

And lots of blood is exactly what long-time neighbor Kolarich saw when he followed a police officer into Newgent’s apartment after the attack.

“I went in behind him, and I seen her laying in the middle of the living room floor in a puddle of blood with her skull split open, and I wish I wouldn’t have seen that, because that is going to stay ingrained in my mind for the rest of my life,” Kolarich said.

Neighbors say that Wilson didn’t seem violent before—but the prosecutor’s office released today that he was previously convicted of reckless homicide in 1996. That’s why it’s illegal for him to have the two guns that were found in his apartment.

Neighbors say they guess they misjudged him.

Kolarich has positive memories of Newgent.

“Excellent-hearted, down to earth, could have been anybody’s loving grandmother. Beautiful, loving person,” Kolarich said.

Wilson is being held in the St. Joseph County jail without bond until his initial hearing Monday.