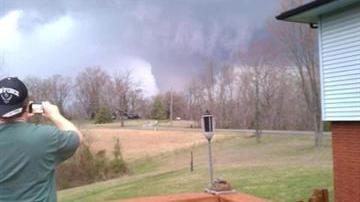 MISHAWAKA, Ind. - A Mishawaka woman is thankful that her family survived a deadly outbreak of tornadoes across southern Indiana Friday night.

Misty Harding's dad, grandma, aunt and cousins all live in Clark County which was hit hard by tornadoes.

As of late Friday night at least nine people have been reported killed because of the twisters.

"I was scared, I immediately started calling my dad and my grandparents," Harding said.

The calls to her dad, aunt and cousins didn't initially go through, but she was able to get ahold of her panicked grandma.

"She was really scared, you could tell, her voice was shaky."

Her grandma rode out the storm in the basement, updating how she was doing on Facebook.

Harding wanted to leave Mishawaka and go to Clark County to be with her family but after seeing the damage she knew it was too bad and that roads would likely be blocked.

"I'm just going to stay up here, there is nothing I can really do right now, they know I'm thinking about them," she said.

Harding credits Facebook for keeping her calm during the severe weather.

"It gives me a sense of relief, how they are updating Facebook and reaching out to me to let me know they are okay. 10 years ago it wouldn't have been possible and I would be terrified here not knowing what was going on with my family.

Several people have asked how they can help the victim's, you can donate to the American Red Cross by clicking here.