Missile launch: Was North Korea practicing to strike US bases in Japan? 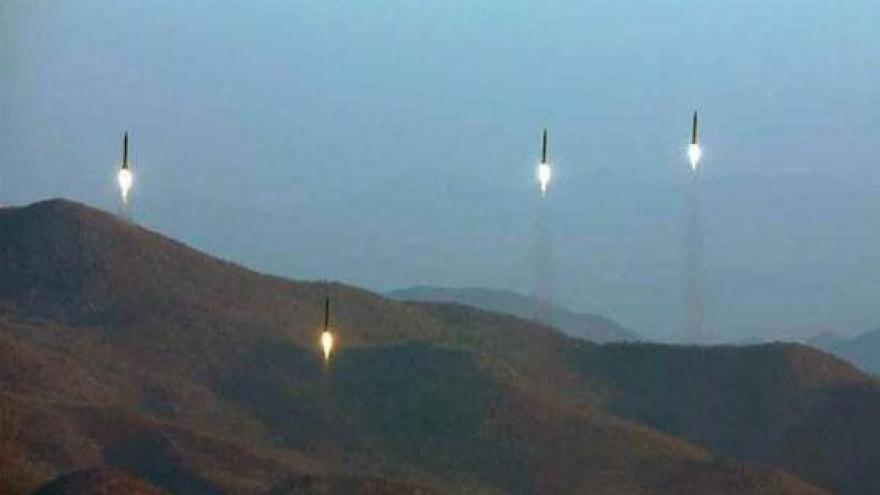 (CNN) -- A North Korean military unit tasked with striking US bases in Japan was involved in Monday's launch of four ballistic missiles, according to state media KCNA.

The missiles, three of which landed within 200 miles of Japan's coastline in its exclusive economic zone, were fired as part of a drill by North Korea's Hwasong artillery units, KCNA said Tuesday.

The report said the units were part of "the KPA Strategic Force tasked to strike the bases of the US imperialist aggressor forces in Japan in contingency."

North Korean leader Kim Jong Un supervised the country's ballistic missile launches and was said to be pleased with the unit's performance, according to KCNA.

There are currently about 54,000 US troops stationed in at least seven bases scattered across Japan, including Misawa Air Base in the far north to Okinawa on the country's southernmost islands.

The military bases in Japan cost the US government about $5.5 billion in 2016.

White House press secretary Sean Spicer said, "The launches are consistent with North Korea's long history of provocative behavior. The United States stand with our allies in the face of this very serious threat.

"The Trump administration is taking steps to enhance our ability to defend against North Korea's ballistic missiles, such as through the deployment of a THAAD battery to South Korea."

President Trump also spoke Monday with the acting South Korean President Hwang Kyo-ahn to discuss North Korea's missile test, a US official says, in addition to the call with Abe.

According to the acting president's office, they agreed to continue annual military drills and add pressure and impose sanctions against North Korea.

The UN Security Council is scheduled to discuss North Korea in closed consultations at 10 a.m. Wednesday morning. A planned Syria meeting was moved to 3 p.m.

Military authorities in South Korea, Japan and the United States confirmed the launch of four projectiles, which traveled almost 1,000 kilometers (620 miles). US officials said they were extended range SCUD missiles.

A fifth missile was also fired but failed.

This isn't the first time North Korea has launched multiple missiles over this distance.

CNN's Will Ripley and Junko Ogura in Tokyo, Lonzo Cook in Atlanta, Richard Roth in New York and Zahra Ullah in Hong Kong contributed to this report. Barbara Starr in Washington also contributed.