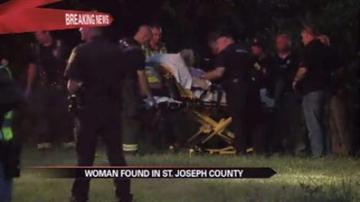 She was found by an officer on horseback. The officer spotted her footprint, then saw her standing in a field.

She was a bit dehydrated, but otherwise in good condition.

She was taken to the St. Joseph Regional Medical Center to be checked out.

Her family was notified.

Tavernier, who suffers from dementia, was reported missing at 10 a.m. from Dolly's House.

“She was last seen at two a.m. and at 9:45, they discovered she was not in the house. After searching the house, then they called us,” said Sheriff Grzegorek.

Sheriff Grzegorek used officers on horse and on ATV's,

“Our searches were at first on foot then we called in the dogs and we also called ISP. and got a plane in the air,” said Grzegorek.

Police even put in a call to a missing children’s organization out of Florida to enlist neighbors for the search.

“They did a mass recording that went out to the neighbors within a two mile area,” said Grzegorek.
Neighbor Darlyn Maust says this is not the first time Tavernier has disappeared.

“She is out a lot. Her dog gets out all the time.  She is always chasing after her little dog,” said Maust.