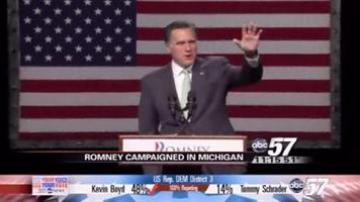 LANSING -- Mitt Romney was rallying in Michigan on Tuesday.

He's the presumptive nominee for the Republican Party.

This was his first trip back to the battleground state since his primary win there in February.

The former Massachusetts governor took no time to get on President barak Obama.

He said Obama's four years have been filled with nothing but disappointments, and he's been trying to point the finger at someone else.

"His earlier attempt to try to blame others. His predecessor, Congress, the 1 percent, ATMs, the tsunami," said Romney.

During his rally, Romney also said he wants credit for the auto industry turn-around.

This, despite the opposition to the $81 billion federal bailout, which ultimately helped General Motors and Chrysler to bounce back from bankruptcy.