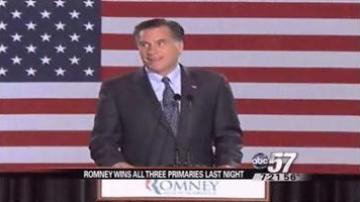 The race isn't over quite yet, but Mitt Romney appears to have a lock onto he GOP nomination.

Those victories helped Romney pass the half-way point of the number of delegates needed to clinch the nomination.

Rick Santorum isn't ready to give up, just yet, even though Some people think it's in his best interest to do so.

Matthew Dowd, A political Analyst with ABC News said, "I think he has to get out because he wants to preserve any political capital he has left in the republican party."

Santorum said that he can win in his home state of Pennsylvania, but polls there show Romney is closing in.

Romney hit the campaign trail in Pennsylvania on Wednesday, and his campaign is gearing up to put the pressure on Santorum there.