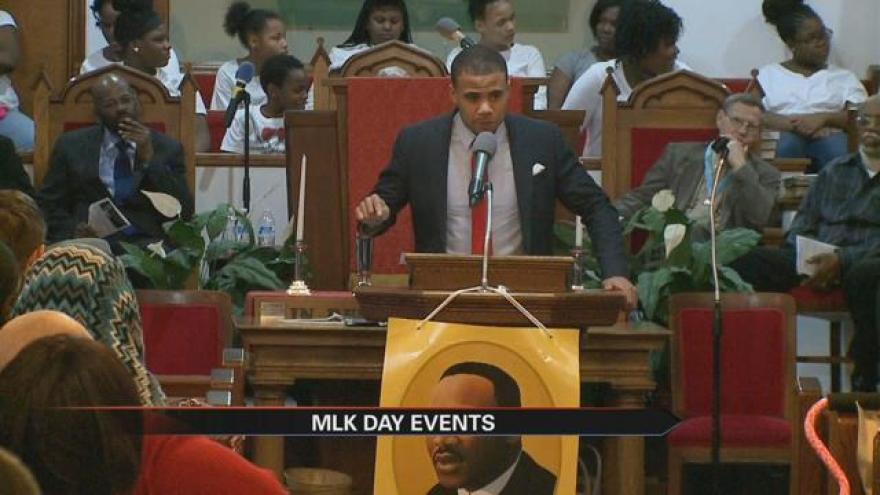 Mayor Tim Neese told ABC57, he was surprised by the number of people who walked one mile this morning from the Civic Plaza to Community Missionary Baptist Church.

Mayor Neese says compared to the seven people that marched last year, the 75 that showed up on Monday looked like a small army.

For 25 years, the Elkhart Chapter of the Indiana Black Expo has dedicated a service in remembrance of Martin Luther King Jr. This year Robert Taylor, the President of the Elkhart Chapter, was pleasantly surprised with the number of people that showed up.

“Today was one of the largest crowds we have had for this celebration,” said Taylor.

Taylor has been the president for three years and says this year had the best turnout. “They said we had about 300 people here. I can just say overwhelmingly we had a lot more people.”

On Monday, Community Missionary Baptist Church was full and among those filling the pews, Congresswoman Jackie Walorski.

“I can’t wait to get here because I have it in my calendar, this is one of the biggest blessings I walk into every year,” said Walorski.

Arivs Dawson, the Chapter Liaison, says this celebration is geared toward the children in our community. “We want them to understand that this is not a day off. This should be a day of service. Dr. King was about doing service in the community, so we try to gear our program toward the kids so they understand that his legacy is about service.”

But in order for that to happen, Dawson says Elkhart has to come together to help unite.“Our sense of community has to become better; we are all one, we are all in this together. We’re one Elkhart."

“I don’t want the city of Elkhart to be defined by anyone’s color,” added Mayor Neese.