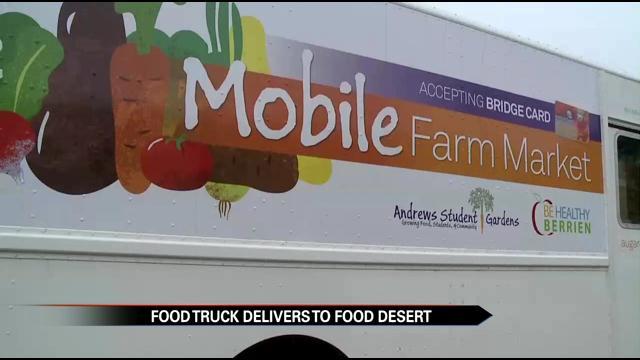 A mobile farm market is making a difference in Michigan one vegetable at a time. Andrews University said due to its success this summer they are going to expand next year.

According to the USDA, there are four large food deserts in Berrien County. They include a part of Benton Harbor, Niles, Buchanan, and Berrien Springs. Every Monday the market would stop at the Ferry Street Resource Center so residents could buy nutritious food.

One woman said she loved the recipes the dietitian would provide.

The director of the student gardens at Andrews University said his data shows that the program was a great success.

Garth Woodruff said, “60% of the people felt that they were eating healthier inside their own homes. 47% of the people heard their neighbors talking more about health than they did the summer before.”

Woodruff said that students grow the majority of the fruits and vegetables that they sell in the truck.

Woodruff said, "Somebody with an EBT card which is food stamps, buys fresh produce at a farmers market, they can
get a two for one deal so they can basically spend two dollars for everyone dollar of cost.”

He said 30% of their patrons paid with food stamps. Stephen Erich said “It was kind of a dream, a dream opportunity.”

Erich drove the mobile farm market to the Ferry Resource center in Niles every Monday this summer.

Andrews University said they hope to expand the program into the fall next year, and they are also looking into a delivery service where vegetables would be taken straight to people's front door.