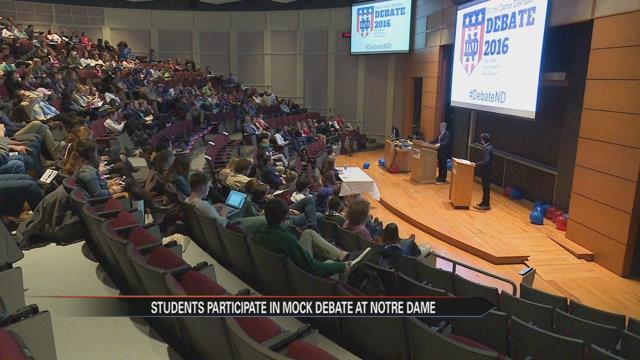 But unlike the real thing, the two candidates chose to fight over real issues instead of personal attacks and rumors.

The campus is known for galvanizing students around the electorate.

From past campus visits from presidential hopefuls to Father Jenkins’ involvement in this year’s presidential debates, the university’s legacy is what’s inspired the re-imagining of how the real face offs should have gone.

“People can walk out and say I learned something, I may not have agreed with them, but I can agree to disagree,” said William Lederer, a junior at Notre Dame and the Republican Party representative in the debate.

Lederer and his Democrat Party debate opponent, Prathm Juneja, proved two political parties could have discourse and still be civil.

“If they’re undecided, if they’ve changed their minds, everyone wins if people are talking about it,” said Juneja.

They’re hoping their conversation can spark more ahead of the general election.

“If you can have five kids in the dorm room start talking about politics because me and will got up there and argued for a little bit, I think that’s what matters,” said Juneja.

But whereas the real party nominees’ debates oftentimes got personal, only the issues were on the table when these students sparred.

That reluctance to step up and run for office and apathy toward voting are problems the next generation of leaders at Notre Dame are looking to curb.