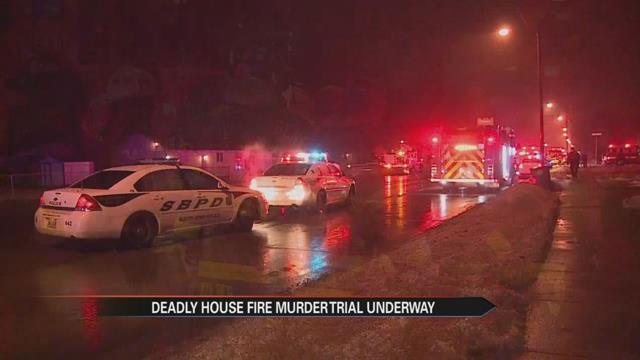 The murder trial began Monday for a man accused of throwing a Molotov cocktail into a South Bend home.

The defendant, James Huffman is charged with the murder of Robert Tucker, and two other counts for allegedly damaging a home on Greenview Avenue.

The act of arson took place on January 20 at a South Bend home where Tucker was staying.

Tucker died from his burns shortly after, and three other people were injured in the fire.

“I cocktailed that house,” was the first official statement Fronk made to the jury, referring to what Huffman is alleged to have said to friends.

Defense attorney Jeff Kimmell said the people who came forward with information were unreliable individuals, and implied that they named Huffman as a suspect in order to cut deals for their own cases.

Kimmell also said Huffman couldn’t have thrown anything through the home’s window with his right arm, as that arm has a birth defect and has no elbow or strength.

A number of witnesses were called, beginning with a police officer who responded to the scene.

Tucker’s daughter testified, as she was in the house with her father just before the crime occurred.

Two women who say they witnessed the crime also took the stand.

One woman said she saw a man in dark clothes throw something into the house that January night with his right hand, and immediately after the house was up in flames.

The trial is under Judge John Marnocha, and is expected to continue for four to five days.