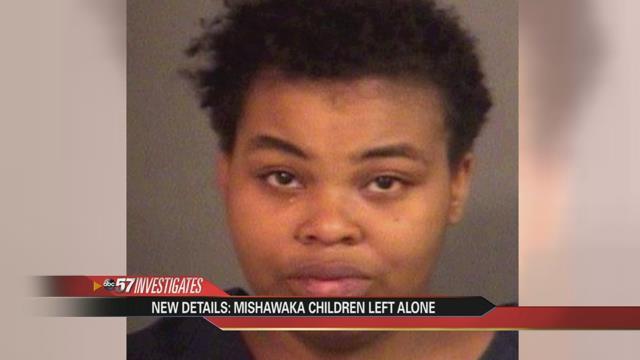 On Tuesday, we first told you about a Mishawaka 5-year-old who called 911 because he couldn't find his mom and he was home alone with his baby brother. The prosecutor released the probable cause affidavit after 27-year-old Darnisha Robinson was charged with four felonies.

The affidavit said the 10-month-old baby was found by police crawling around on a filthy floor holding a bottle full of pills and trying to eat cigarette butts that were on the ground.

Robinson was officially charged with 2 counts of neglect of a dependent 1 count of possession of marijuana and 1 count of being a common nuisance.

On Tuesday the Chief of Police in Mishawaka said this scene hit home for some of his officers.

Witkowski said, “They've been on quite a few years. And they see a lot. And not too much really hits home.”

Witnesses saw police go get the kids food and play with them while mom was arrested.

Witkowski said, “Picked up some McDonalds and got them some pancakes and a good breakfast.”

Police said when they were on scene, the 5-year-old was trying to eat rock hard pizza off the ground and he told officers he hadn't had anything for dinner either.

One officer said it appeared that the baby had gotten into an ash tray because ashes were all over his face.

After a warrant was obtained, police searched the home and found a bag of a white powdered substance as well as 24 grams of marijuana.

A Department of Child Service's officer on scene said the 5-year-old showed her how to put marijuana into a cigarette to smoke it.

In the documents police said Robinson showed up to the scene and told police a cousin was supposed to be watching her kids.

Robinson told police she went to go get cigarettes, then said she was at a friend's house in the same apartment complex for several hours.

A Mishawaka Police officer said the 5-year-old told police he didn't want to go back to Child Protective Services.

ABC57 investigated Robinson's past and she's been arrested before in St. Joseph County for shoplifting and arrested in 2006 in Berrien County for a traffic violation that was dropped.

Robinson will be back in court June 19th.