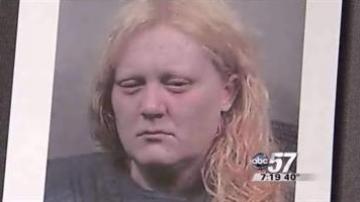 TRAFALGAR, Ind.-- A woman is locked up, accused of drowning her 3-year-old son.

Police arrested 33-year-old Amanda Smith Monday night at her apartment in Trafalgar. That is just south of Indianapolis.

Dispatchers said they received two 911 calls from Smith, saying she had killed her son.

When officers arrived, they had to force their way in.

Chief Kurt Heminger with the Trafalgar Police Department said, "She stated on a 911 tape that the child was in a better place. She actually came out of the bathroom swinging an ax through a door at my officers."

Investigators say that Smith suffers from mental illness and called police more than 200 times in the last year.

Smith didn't have custody of her son, but the court granted her weekly supervised visits.