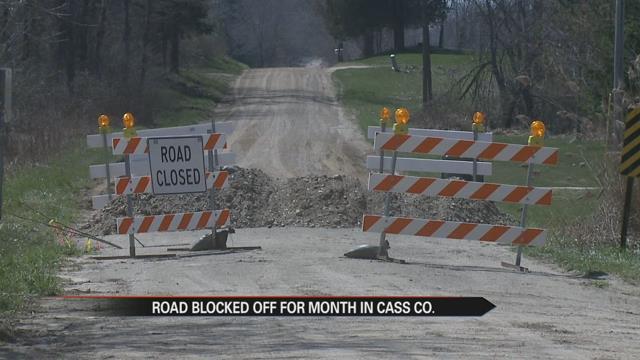 A Cass County road has been blocked off for nearly a month and homeowners want to know why it’s taking so long to repair.

Inside Cass County’s Calvin Twp., a community is divided, but not because they disagree about something.

“I live on the north side of this closing and everything anybody in this neighborhood does is to the south,” Sheila Birge said.

Birge lives right next door to a road block that has cut Cassopolis Road in half since mid-March.

“I am hoping that they get this fixed quickly and it doesn’t keep happening,” Birge said.

She says a sinkhole keeps opening up in this part of the road.

“The last three years it’s washed out, they simply put dirt in it, packed it down and moved on,” Birge said, speaking of the county road commission.

But things are different this year.

The Cass County Road Commission blocked the road off with barricades after a culvert collapsed around March 12.

Residents are getting frustrated.

After the barricades were tossed in the water so drivers could pass, the county dumped a pile of dirt and rocks onto the street to keep drivers from crossing.

“Last week, a gentleman tried to go around and ended up in the water,” Birge said, showing a picture she took of the ordeal.

So ABC57’s Taylor Popielarz went to the Cass County Road Commission for answers, but the managing director did not want to speak on camera.

He did say, off camera, that the project is taking some time because the commission needs to get two bids from separate contractors in order to secure a proper permit from the state.

So far, they’ve only gotten one bid.

A representative from the Michigan Department of Environmental Quality explained why this project is a complicated one.

“This particular crossing is tricky because it actually is controlling the lake level for the three lakes that are upstream,” Jim Watling said in a phone interview. “So there’s a little more involved than just a standard culvert replacement, with regard to the amount of water that they’re gonna need to deal with when they’re doing the construction.”

But residents are left with a major detour while the road is closed.

The only way to get to the other side of the roadblock by car is to drive across three long stretches of roadway, something ABC57’s Taylor Popielarz did twice, and it timed out to just over 11 minutes.

“I have put an extra 10, 20 miles on my vehicle every day to go around this [roadblock],” Birge said.

She added that it’s not only residents who are impacted by the road closure – the mail carrier, any delivery drivers and local farmers who use the dirt road to transport their heavy equipment are unable to do so until the repairs are made.

Smith, whose farming equipment is stored at his brother’s property that’s on the opposite side of the roadblock, said having to transport his equipment on busier stretches of road poses a safety hazard.

“Because you’re out there with big equipment on those [busier] roads longer than you’d like to be,” Smith said. “We like to keep to the less used roads and travel where there’s not so much traffic.”

“The trash trucks…the UPS [driver], everybody gets very angry when they get down here and realize [the road is blocked],” Birge said.

The Michigan Department of Environmental Quality said it will be at least another two to four weeks until the stretch of road is repaired.