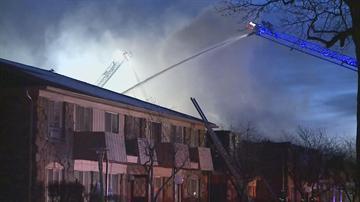 SOUTH BEND, Ind. – A class action lawsuit has been filed by a group of former tenants at Park Jefferson Apartments months after the devastating fire that tore through one of the buildings at the complex.

Attorney Peter Agostino has filed a class action lawsuit on behalf of 21 tenants who lost their homes in the January 6 fire.

"Some of these people lost everything that they owned,” Agostino explained.  “Some of them are still suffering."

The lawsuit calls for Park Jefferson to repay tenants for lost property, emotional damage and a wrongful death.  Ashley Lear, a 24-year-old mother of two, committed suicide the day after the fire.

“She had been suffering from psychological issues before,” Agostino described.  “Our contention is that this fire and watching all her belongings go up in smoke pushed her over the edge."

Agostino said that the electrical system in the building was overloaded and that the firewalls were defective.

"Over time as different companies went up there and put in cabling and other items they would break through the walls,” he claimed.  “The walls then no longer serve the function they were there for."

The suit could set a new precedent in Indiana’s legal system, Agostino explained that there isn’t a clear definition of what can be asked for in cases asking for payment for emotional damage.

“The law in Indiana has developed very slowly, it does allow you to recover from emotional damages in some type of horrific situations,” he explained.  “I don’t believe there’s been a specific case exactly on point like this one, so we may be expanding the law in this area.”

There is no set dollar amount asked for in the lawsuit, Agostino said each individual tenants will ask for a dollar amount to make up for their lost property and then it will be up to a jury to decide how much may be awarded for emotional damages and for the death of Ashley Lear.

Management at Park Jefferson could not be reached for comment on the lawsuit on Friday.