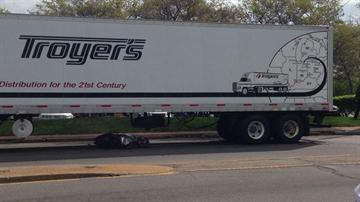 SOUTH BEND, Ind. -- A moped rider was killed when his moped was hit by a semi at Lincolnway East and Sample Street in South Bend around 10 a.m. Monday.

South Bend Police say the moped driver was headed westbound on Sample Street when he ran a red light and was struck by the semi.

Investigators shut down the road for several hours while they recreated the accident to try to determine what happened.

Police say the driver of the semi did his best to avoid the moped, but wasn’t able to stop in time.

“Injuries were such that I don’t know if it would’ve mattered much," said Kraus.

He was taken to Memorial Hospital with serious head trauma, but died a short time later.

Early evidence indicates the driver of the moped was struck by the semi’s rear tires.

With warmer temps on the way, police are asking all drivers to be mindful of cyclists on the roadways and asks cyclists to wear a helmet.

The moped driver has been identified as 60-year-old Jerry Sailor.