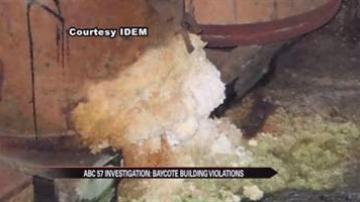 MISHAWAKA, Ind. – We continued our investigation of the old Baycote Metal Building on Tuesday.

We got a hold of past reports from the Indiana Department of Environmental Management (IDEM) on the facility.

IDEM told us they inspected hazardous waste facilities Baycote’s size at least once every three years. Crews inspect more often if there are violations or problems founds.

There are 46 documents listed on IDEM’s website regarding Baycote.

It appears the facility was cited for violations before and after the site shut down in 2008.

Baycote closed its doors in January of 2008. IDEM conducted an inspection in July of 2008 and discovered a list of violations. This included drums leaking contents, 50 pounds bags of unknown material punctured, and dip tanks with chemicals still inside.

In 2009 the property owners came to an agreement to clean up the left over waste.

In February 2010 IDEM performed another inspection which showed some materials had been removed, but they weren’t being removed fast enough.

IDEM told ABC 57 they tried to more inspections one in late 2010, and one in early 2011, but they couldn’t gain access into the building.

IDEM said they contacted the EPA for help in cleaning up the site.

The EPA now has removed all but 20 percent of the hazardous material on site.

For a full list of the state documents regarding Baycote visit the following website. (Will take a few minutes to load)